Someone fixed a dangerous Toronto intersection with a bunch of leaves 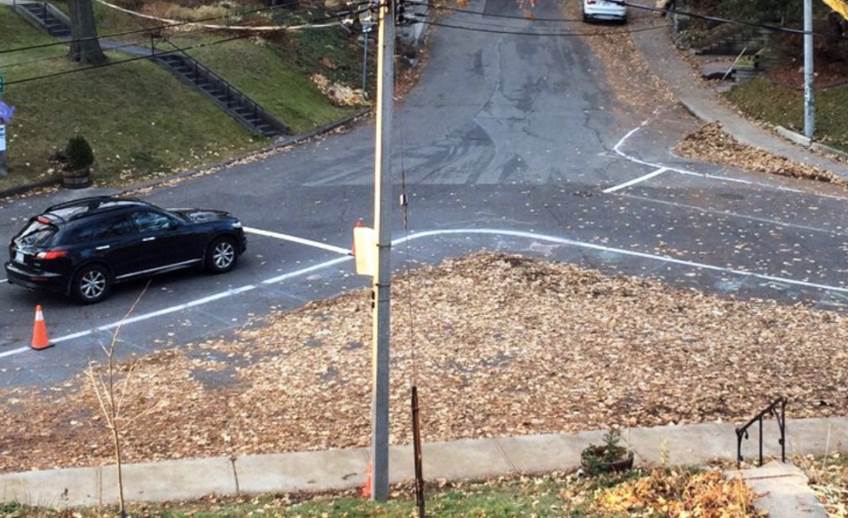 If Toronto’s famous stair-building senior citizen taught the world anything (who am I kidding? He taught us everything), it’s that the quickest way to fix a neighbourhood problem is a little bit of DIY.

Artist and community organizer Dave Meslin knows this well. He literally wrote the book on civic engagement in Toronto, and is widely known for his unique brand of creative activism.

Last week, he decided to take action against a problem in his own community of Regal Heights. But unlike 73-year-old handyman Adi Astl, who caught the city’s ire by building an actual staircase in a public park, Meslin and his neighbours did something completely temporary (and thus pretty unimpeachable). 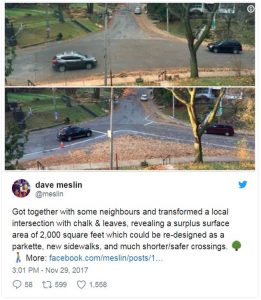 Using only sidewalk chalk and fallen leaves, Meslin and his neighbours temporarily “fixed” a dangerous intersection near Regal Road and Springmount, taking special care to maintain all existing road widths at a city-approved 28 feet.

“We revealed a surplus surface area of 2,000 square feet which could be transformed into a parkette, new sidewalks, and much shorter/safer crossings,” wrote Meslin in a Facebook post about the project.

That post, uploaded yesterday, is spreading like wildfire around the city right now as fans of the project praise the group of neighbours for their ingenuity and “wonderful use of tactical urbanism,” among other things.

Will city workers sweep away the leaf-and-chalk crosswalk as word of its existence spreads? Maybe.

That said, it could call enough attention to the dangerous intersection for Toronto to fix it permanently. It worked for Astl, and the leaves do seem to be alleviating traffic woes in the neighbourhood. 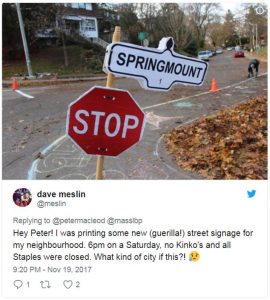 “Saw this walking our dog the other night and yes – actually saw cars stopping!!!” wrote one woman on Twitter. “It is a strange corner.”

In a separate reply to someone else on Twitter, Meslin said similarly that, while the intersection actually has three stop signs, no one knew where to stop before the leaves and chalk were in place.

“With our white lines, I finally saw people stopping for the 1st time,” he wrote. “It was safer than ever.”