Today the bluff is a picturesque feature that gives homes on Regal Road a view of Lake Ontario, the Niagara Peninsula and the city of St. Catharines, and helps capture cooling breezes from the lake on hot summer days.

Early Maps of the Area

Photos with thanks to St. Clair West In Pictures by Nancy Byers and Barbara Myrvold, available here.

Tributaries of Garrison Creek, which supplied water to Fort York — the military camp that helped found Toronto in the 1790s — also shaped the local landscape. Springmount, Alberta and Mount Royal Avenues were built on top of or close to the actual creek bed. Garrison Creek was treated as a garbage dump in the 19th century and to protect public health it was put in an underground sewer pipe between 1880 and 1914.

Gardeners in the area find the soil in the Regal Heights neighbourhood to be largely heavy clay. Treated well, the land can be productive and during the 19th century small farms and market gardens were established to feed surrounding communities such as the Villages of Carlton, Davenport, Brockton and Yorkville, as well as the City of Toronto.

Before farmers tilled the land, stands of white oak and pine covered the landscape. A handful of century old white oak trees can still be found in the neighbourhood. Towering Norway Maple trees, planted by the city in the 1920s, shade the front yards of many homes.

In addition to cash crops, settlers planted ornamental gardens around their homes. In 1853, printer, editor, politician and businessman, George Thomson bought a house in the nearby Village of Carlton, at St. Clair Avenue West and Old Weston Road. He recalled growing lilac, lobelias, orchids, prairie rose, and cacti, as well as bushes such as spiraea and St. Johns-Wort. 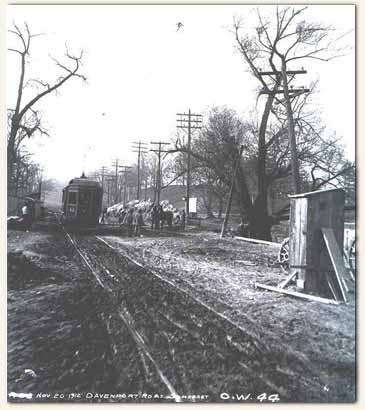 In 1912, a view west from the corner of Davenport Road and Somerset Avenue shows no houses built on the bluff. The willow tree on the right marks where Garrison Creek crossed Davenport, near where Mount Royal Avenue meets Davenport Road today. (This photo is courtesy of the City of Toronto Archives, SC 231, item 272)

In 1916, photographer John Boyd pictured rolling countryside, a woodlot and a muddy road just west of Regal Heights.
(This photo is courtesy of the Public Archives of Canada, PA69940)