The oldest man-made feature in the Regal Heights neighbourhood is Davenport Road. First Nations used a path along the base of the Davenport Hill to connect the Humber River at Weston with the Don River valley. In the 19th century, farmers in the Regal Heights neighbourhood found arrowheads when they turned the soil, showing that First Nations were familiar with the area.

In the 1660s, Hurons ranged throughout central Ontario and brought the French explorer Etienne Brûlé to the mouth of the Humber River in 1615. A few years later, the Iroquois drove the Hurons from the area in order to dominate trade with the Europeans. In the early 1700s, the Ojibway came from North of Lake Huron and Lake Superior and pushed the Iroquois out of central Ontario to better access trade with the British in what is now New York State.

The Ojibway traded with the French at Jean Baptiste Rousseau’s store at the mouth of the Humber River, and later with the British at a river in Mississauga that became known as the Credit River because of the volume of business conducted there.

In 1787, the British purchased much of the land around Toronto from the Ojibway tribe that were later called the Mississaugas. As the city grew and farmers fenced in former hunting grounds, the Mississaugas moved west in 1847 to land given to them as a gift by their former rivals the Iroquois, at the Six Nations Reserve along the Grand River. 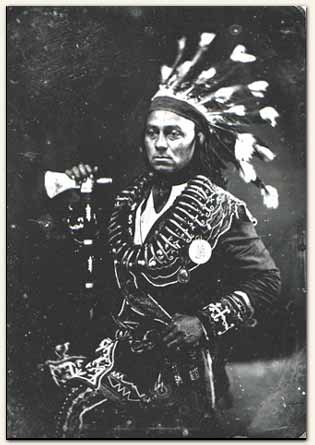 In the 1840s, Mississauga chief Maun-gua-daus, also known as George Henry, had his picture taken in Toronto. The chief is wearing richly decorated clothing to participate in a demonstration of Ojibway culture.