During the First World War (1914-1918), the City of Toronto expanded as new factories were built to meet the needs of Canada’s war effort. In 1916, the Ford Motor Company built a factory at the corner of Dupont Street and Christie Street. The following year, Canadian Aeroplanes Ltd., opened the largest aircraft factory in the British Empire at Dupont Street and Dufferin Street.

Photos with thanks to St. Clair West In Pictures by Nancy Byers and Barbara Myrvold, available here.

The people working in these factories needed homes to live in. Brick homes – both detached and semi-detached — were built in the Regal Heights neighbourhood for both workers and executives. Many homes featured porches, while their interiors were graced with wood paneling, and leaded and stained glass influenced by the arts and crafts movement.

Building these homes was relatively easy because during the term of Toronto Mayor George Geary (1910-1912), streets were laid out and construction started on two schools, Regal Road elementary and Oakwood Collegiate Institute. Davenport Road was paved, making it a safe, swift link between the neighbourhood and downtown Toronto.

During this period, Toronto artists were attracted to the scenery and the colour of a growing community. Before he became a leading member of the Group of Seven, Lawren Harris painted pictures of the homes and temporary shacks of residents in the Bathurst St. and St. Clair Avenue West area.

In 1926 and 1932, George Agnew Reid and Doris McCarthy painted murals in the Dufferin/St. Clair Branch of the Toronto Public Library. These art treasures were painted over in the late 1960s and remained hidden until the Regal Heights Residents’ Association launched a project to have them restored. Thanks largely to the efforts of John McAuley and David Self, wonderful works like this George Reid mural, entitled “The Family” are visible once again. The restoration was completed by the talented restorer Laszlo Cser. The Regal Heights area remains an active area for the creative arts, encouraged by local organizations such as Art Starts. 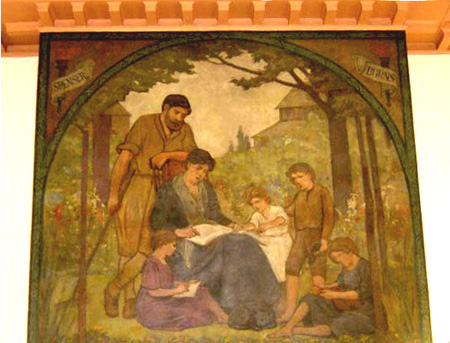