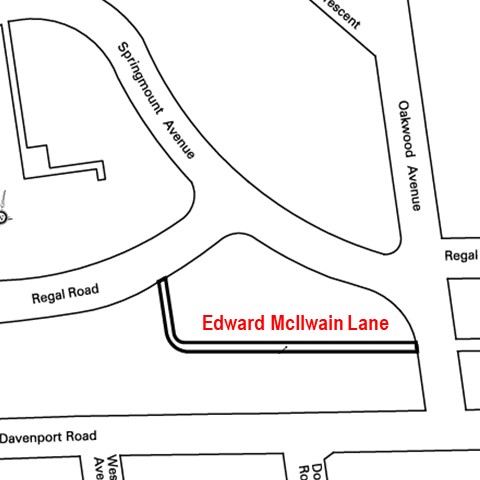 On Wednesday, June 26th at 6 pm, the laneway between Oakwood Ave. and Regal Rd. will be officially named “Edward McIlwain Lane”. Come and join in the recognition of a former well-respected neighbor and friend to all. Everyone is welcome!

Edward McIlwain lived at 1380 Davenport for over fifty years. He came to Toronto from Thunder Bay in 1962. He and his wife Mary, raised four girls, Linda, Cindy, Kelley and Beverley. They attended Regal Road School and Winona Public School and then went on to further education. They all still live in the neighbourhood.

“Ed” (as he was known to everybody) worked for 40 years as a Plasterer. All houses in that period had plaster walls and ceilings. Ed became an artist in his craft as a plasterer and he would get calls long after he retired.

Edward McIlwain was a friend to everybody and everybody knew of his warm generous spirit. He was always helping others or the community, never missing an opportunity to contribute. He instilled this social conscience in his daughters and his grandchildren who still live close by.

When walking became a problem in his retirement, he drove a scooter and continued in his usual kind manner. Edward was predeceased by his wife and he died in 2013.

We wish to honour a remarkable man who befriended everyone and helped where he could, leaving a legacy of a family with his attributes in our neighbourhood. We were lucky to have known Ed.

Consent was given by Linda DeGiorgio, Ed’s daughter and Treasurer on the Regal Heights Residents’ Association executive committee.

Dozens of family, friends and neighbours turned out on Thursday, June 27 for the official unveiling of the newest named lane in Regal Heights.

Councillor Ana Bailão’s office presented the family with a framed copy of the City ordinance approving the new name. The Regal Heights Residents’ Association also presented a copy of the order on a decorative scroll.

Ed worked as a plasterer and many homes in Regal Heights still have lovely “Ed” ceilings.  He was also heavily involved in the life of the community. Even in his later years, neighbours would see him on his scooter, helping to pick up trash on the annual neighbourhood cleanup day. He died in 2013.

In his keynote speech at the ceremony, long-time friend and Regal Heights resident Michael Erkelenz remembered Ed as a man who knew everything there was to know about our local community, “a one-man repository of neighbourhood lore.”

More important, Michael said, Ed was always willing to help. “He put the word “neighbour” in “neighbourhood,” he said. “Especially when he was younger and in his prime, he was an almost limitless source of aid and assistance to the people who lived around him.”

The ceremony concluded when two of the youngest members of Ed’s extended clan removed a cloth cover to reveal the new street sign marking the Oakwood end of Ed McIlwain Lane.

Congratulations to the family and a special thank you to Florence Watts, whose energy and persistence made the new lane name a reality.

One thought on “Edward McIlwain Lane”