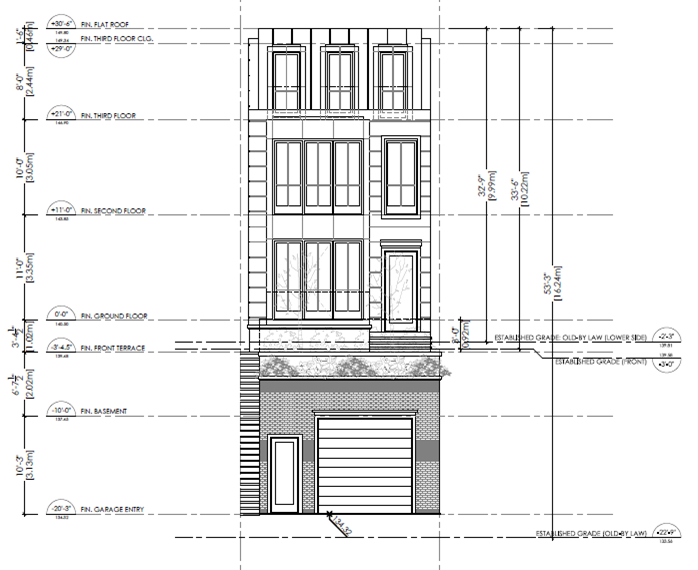 The RHRA has received notice of the intention to demolish 2 homes on Springmount Avenue (49 Springmount, 51 Springmount) and to replace them with 3 new homes.

For any other comments or questions contact Harry Lay at: harrylay@bellnet.ca

October 18, 2018 Update: The applicant has has withdrawn their appeal. The hearing is now cancelled

The hearing at the Toronto Local Appeal Body (TLAB) regarding a proposed development at 49-51 Springmount Ave. Has been cancelled.

The hearing was to take place Thursday, Oct. 25 and Friday, October 26. However, the developers withdrew their appeal of an earlier TLAB ruling that rejected the development plan.

We will post any further information about this issue here as it becomes available.

OCTOBER 14, 2018 UPDATE: Appeal from the Springmount Collective to Attend the New Hearing

The new TLAB hearing is set for October 25 – 26, at 9:30 a.m. at 40 Orchardview Blvd, Suite 253 Hearing Room 1. As before, there will be parties and participants representing the viewpoints of local residents – these groups have been arranged in advance. General members of the community are welcome to attend and thereby show support.

September 20 2018 Update: Coverage of this matter in the Toronto Star

July 11 2018 Update: The Springmount development matter was covered in the Globe and Mail

As set out below, the City of Toronto Committee of Adjustment declined requested variances to the properties in a hearing in late 2017. This decline was appealed to the Toronto Local Appeals Body. That appeal was heard by TLAB in a hearing held in March 2018. That hearing ended in a decision upholding the original decision of the Committee of Adjustment and declining the variances. Subsequently an agent for the applicant has filed for a review of that hearing due to a potential for bias. That review resulted in a decision to set aside the decision of the March 2018 TLAB hearing and to send the matter back to a new TLAB hearing at a date to be set.

Check back here often for updates on this matter.

In a March 29 decision, TLAB member Stanley Makuch dismissed appeals by Brentlane Developments against the City of Toronto  committee of adjustment’s refusal of its consent and minor variance applications for 49 and 51 Springmount Avenue. The lots are located on the ridge of the Davenport escarpment and each contain duplexes that are significantly elevated from the street and have rear laneway access. Brentlane proposed to sever the two lots in order to create three lots, and to construct three-storey detached dwellings with integral garages on each lot. Access would be from the front, off Springmount Avenue, requiring three new curb cuts where none currently exist.

City staff identified no concerns with the proposed development when the applications went before the COA [regalheights.ca editors note: see note below]. Several local residents objected to the proposal and attended the TLAB hearing in opposition. The city also opposed the proposal, represented by legal counsel, but called no expert evidence. Planner Paul Johnston (Johnston Litavski) and arborist Adam Vandermeij (Central Tree Care) provided evidence on behalf of Brentlane in support of the appeals. They testified that the development represented appropriate infill in conformity with the official plan, and that the proposed consent and variances met the required statutory tests.

Despite no expert evidence in opposition, the TLAB did not find in favour of the proposal and dismissed the appeals, refusing the consent and variances. In his decision, Makuch found that the impacts of the proposal, exacerbated by the steep topography of the lot, would be excessive and would fail to respect and reinforce the neighbourhood character. Furthermore, he wrote, no compelling evidence was provided to demonstrate that the proposal satisfactorily addressed official plan policies concerning the preservation of trees and the tree canopy.

Makuch concluded by acknowledging the submissions of the objectors as significant contributors to his decision. Solicitors involved in this decision were Ian Andres (Goodmans) representing Brentlane Developments Inc. and city solicitor Matthew Schuman for the City of Toronto.

[Editors note: re the comment in the NRU report about city staff, Springmount resident Jennifer Wigmore has the following to say: “This is actually not true. The forestry department objected to the development.”]

A copy of that decision can be downloaded here: TLAB – Decision Order

The fight was over 49 and 51 Springmount Ave. Both are rental houses with two apartments each. Brentlane Developments Inc. proposed tearing down the houses, dividing the two lots into three and building three separate high-end townhouse-style homes.

Several residents in the area, including the renters in the two buildings, organized in opposition to the development. They collected the signatures of more than 80 area residents who didn’t want to see the project forward. With the help of selected members of the Regal Heights Residents’ Association, they also appeared at the City of Toronto’s Committee of Adjustment last October. The Committee denied Brentlane the planning variances required to move ahead with the plan.

The developer appealed that decision to TLAB, which heard the case March 14. Several members of the neighbourhood appeared at the hearing.

The houses at 40 and 51 Springmount are set well back at the top of a high hill covered with trees and grass. The development proposal called for digging out the hillside and replacing it with driveways and garages built into the slope. Residents argued that the plan would destroy green space and increase already existing problems with water runoff and drainage. They also noted that the green hillsides are typical of the area and destroying the slope would not be in keeping with the neighbourhood character, as required by planning rules.

The neighbourhood group pointed out that 49 and 51 Springmount already have car access via a back laneway. No other houses in the area have both laneway access and front driveways. The residents were also concerned that levelling the existing houses would remove badly needed affordable housing from the area.

The TLAB adjudicator agreed with the residents are rule against the appeal. A copy of the judgement is attached.

Much has happened since we all signed our name to the petition to protest the town home development at 49 – 51 Springmount Ave. As you know we won our case at the Committee of Adjustment when the application was refused, but of course they appealed the decision to TLAB. (New Toronto Appeal Board – replacing the old OMB) Councillor Palacio came to the rescue by striking a motion at council to hire the city lawyer to defend the Committee of Adjustments decision. We all thought this would be the answer, however we had a meeting with the lawyer and staff on Monday and it became clear that the city lawyer will be defending the city, but not the community.

Which means that now more than ever we need to stand together.

There is a lot riding on the outcome of this appeal. City staff reports all support the development which is a big blow to our cause and seems to run counter to what council and the mayor have said are important issues in the GTA; addressing the affordable housing crisis, maintaining historic neighbourhoods from gentrification and infill, as well as protecting green space and the Niagara escarpment. Councillor Palacio to his credit has really stepped up to the plate, but we need to do more to make sure that this appeal is refused! If we want to: save families from eviction, redesign a dangerous intersection making the Springmount Parkette  and stop this precedent setting development that will change our neighbourhood forever then you must help us.

WHAT CAN YOU DO?!

Come in person to the appeal hearing: We have been told by the city lawyer there really is an impact on the appeal committee when the community objects and shows up in person to these appeals. We saw this the first time, our presence was defiantly felt. A strong voice of objection from the community will counteract city staff’s consent of this project. Please let me know if you can make it. 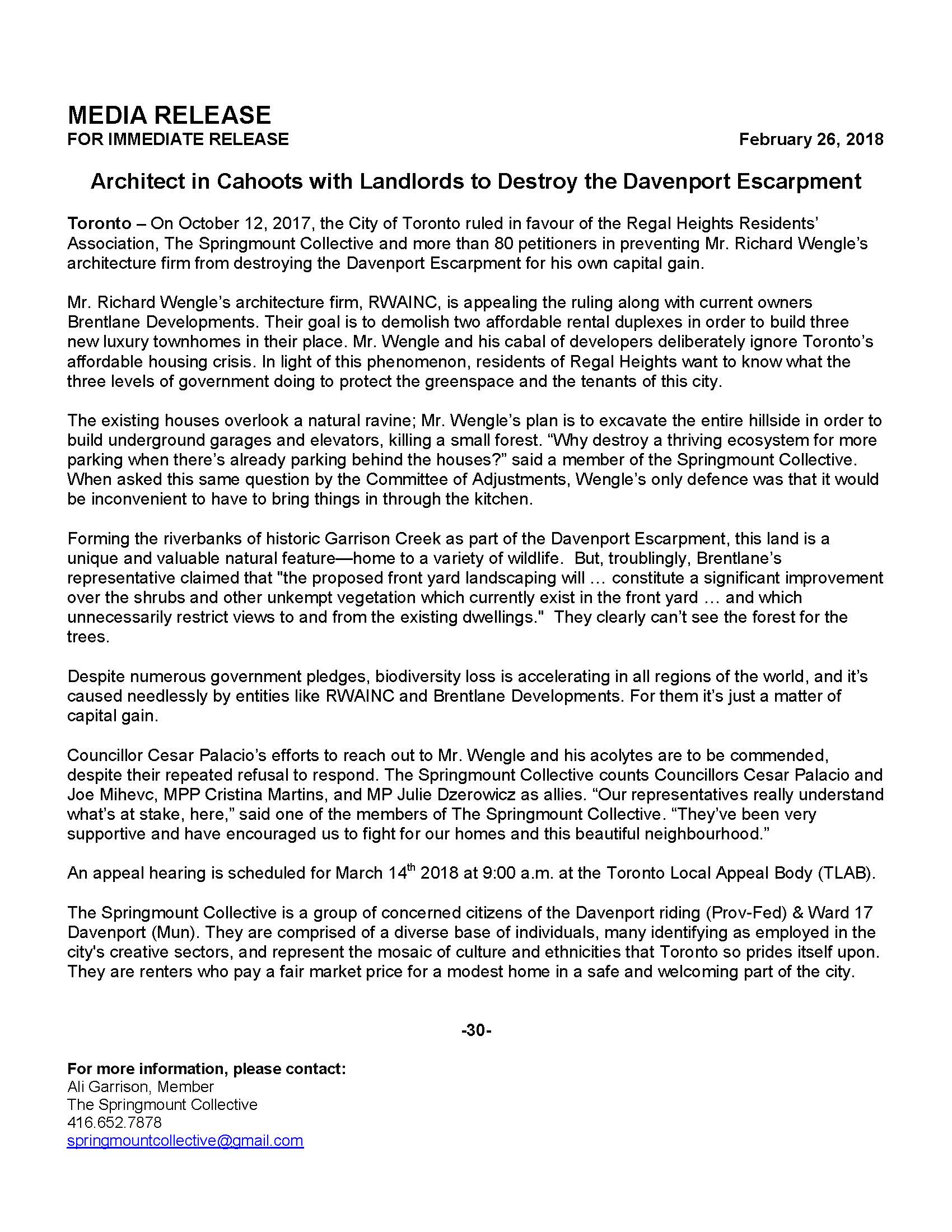 I felt it was time to give you an update on what is happening with the Springmount development proposal.

The developer has appealed the decision. No surprise. Our city councillor, Cesar Palacio, has filed a notice of motion with the city to fight the appeal. No date for the appeal hearing has been set yet.

The upcoming Regal Heights annual general membership meeting is this Wednesday and the development will be discussed. Mr. Palacio will be in attendance. I hope to see you there.

I wanted to send out an update after the variance meeting yesterday.

Thanks to some hard work from the Regal Heights Association, namely Harry Lay and John Keating, a very strong letter from Councillor Palacio, a strong showing of residents at the meeting and our objection letter signed by all of you, we were successful in our objection and the application for minor variances was DENIED!

This is a small victory for our street and the protection of our neighbourhood as a whole. Thank you to all of you who helped make this possible.

Sadly our fight is not over. The developer/owners will probably appeal or redesign and make another application, but the committee was very forthcoming in their dislike of the way the current design did not fit with the topography of the neighbourhood. Hopefully this means a total rethink, but we will have to wait and see.

So congratulations, enjoy our beautiful trees and rolling green banks at least for a while longer.

ps. As the developers of this project are not very transparent, if any of you hear from them regarding a new application, please let me know immediately. As I doubt they will reach out so far down Springmount.

Oct 9th Update: 17 Letters of Comment / Objection have been Submitted to the City’s Committee of Adjustment by Local Residents

Below are links to the submissions. Click on links to retrieve a PDF copy. Each will open in a new browser window 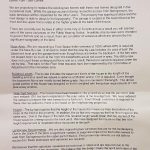 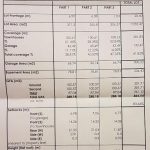 Developers have submitted plans to tear down two rental buildings at 49 and 51 Springmount Ave. and replace them with three three-storey homes with parking garages beneath. The issue goes to the City’s Committee of Adjustment Thursday, October 12. The following letter was drafted by a collection of residents in the area, which they intend to present to the Committee of Adjustment. If you would like to add your name, please contact Jennifer Wigmore at jenniferwigmore@rogers.com

You can find out more about this application including information about the Committee of Adjustment hearing next week, on the RHRA webpage dedicated to this issue.