A group of advocates is criticizing the TTC for delaying the release of the transit agency’s ridership growth strategy by more than a year.

At a press conference at city hall before a meeting of the TTC board on Monday, the TTCriders advocacy group condemned the agency for postponing the plan’s publication until February, which is too late to be considered as part of the 2018 budget process.

Leaders for the group, who were joined by representatives of residents’ and business associations, called on the TTC to move ahead with a proposal expected to be a key part of the strategy to attract more riders: switching to a time-based transfer system.

Time-based transfers would allow riders to make an unlimited number of TTC trips within a two-hour window. Under existing rules, riders aren’t allowed “hop on, hop off” privileges, and must pay a second fare unless they’re making a one-way, continuous trip.

TTCriders spokesperson Jessica Bell predicted timed transfers would not only be beneficial to people who rely on transit, but would also help draw more passengers to the TTC, which is headed for a decline in ridership this year after 13 years of continuous growth.

John Kiru, executive director of the Toronto Association of Business Improvement Areas, said timed transfers would be a boon for small businesses because they would make it easier for riders to stop at several shops during a single trip. He said the measure had been a success when it was temporarily enacted on the St. Clair streetcar route more than a decade ago.

“We truly see this as an opportunity at a time when small business is being challenged” by threats like online shopping and big box retail, Kiru said. 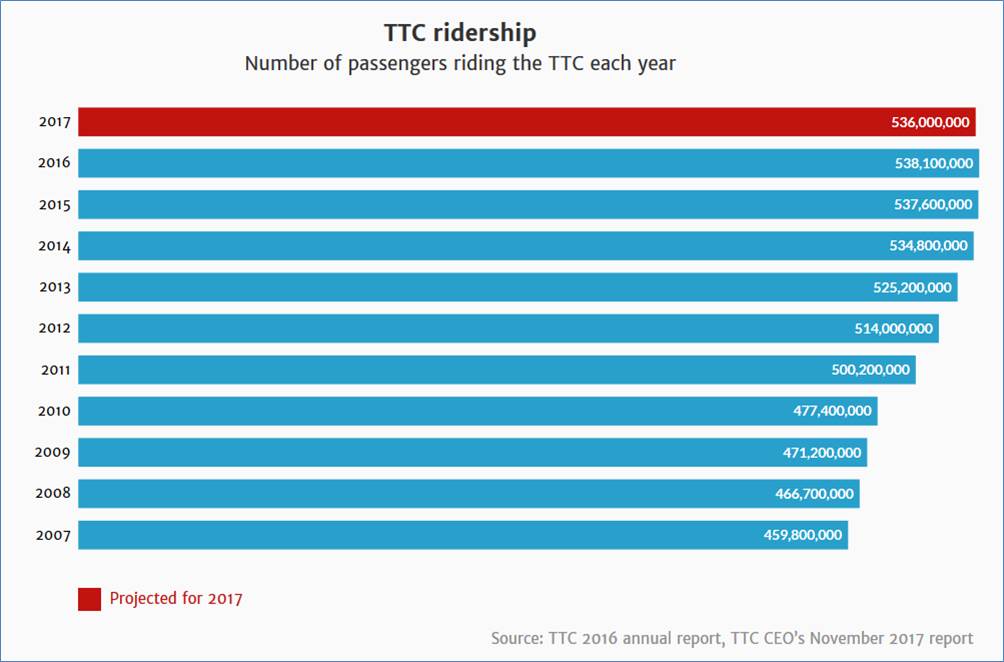 The TTC board voted in March 2016 to develop a ridership growth strategy. A report on the issue was originally scheduled to be published in the third quarter of 2016, but was subsequently pushed back to November 2017, and the strategy now isn’t expected until February 2018.

In an email, TTC spokesperson Brad Ross explained the strategy hasn’t been released because “it’s just not ready.”

“This is a complicated piece of work that staff want to ensure they get right before bringing to the board,” he said.

Speaking to reporters, TTC CEO Andy Byford wouldn’t reveal details of what will be in the plan other than to say it will consist of a “menu” of options that will include inexpensive short-term measures, as well as “much more radical things, which will require time and a lot of money.”

He has previously said the agency will recommend a time-based transfer system as part of the strategy. He said he would support the idea as long as city council agrees to pay the estimated $20 million it would cost the TTC each year.

According to the TTC’s latest projections, 536 million people are expected to ride the system in 2017. That’s 1.5 per cent below the 544 million that the agency predicted at the start of the year, and roughly 2 million fewer trips than in 2016. Many other North American transit agencies are also struggling with slowing or even declining ridership.

Reports the TTC published last year blamed the problem on lower-than-expected employment growth, and a disproportionate increase in part-time and temporary employment. The agency suspects that as more people are employed in jobs that don’t conform to traditional commuting patterns, fewer are interested in buying monthly Metropasses.

Some critics argue that the TTC has driven riders away by instituting six consecutive fare increases while failing to match the higher prices with additional service.

Next Pub Night is scheduled for October 29th 2020. We hope it will be live at the Fox and Fiddle but if shelter-at-home conditions persist, we will hold another Virtual Pub Night by Zoom. Stay tuned for further details. -- Click the photo for more information

Calling all gardeners and nature lovers We need help cleaning up the Regal Heights public garden beds and and naturalized areas.Just an hour or two of your time will make a huge difference!  We will be sprucing up the gardens and doing some autumn planting along Rosemount Ave. and Springmount Ave. When:  This Saturday, October […]