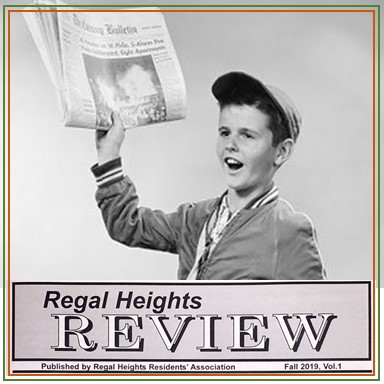 While much of Toronto is flat land, unique geographic features set the Regal Heights neighbourhood apart. Most prominent is the 50 to 75-foot bluff called Davenport Hill or the Davenport Escarpment, just north of Davenport Road.

One of the delights of visiting a new city is stumbling across exotic and surprising details: a hidden cobblestone square, a back alley that opens into a garden, a café behind a bend in a river.

Regal Heights has its own surprises, few of which are as distinctive as its public steps, or stairways. The Springmount Steps begin in a leafy bend in Springmount Avenue leading up to an alley off Glenholme Avenue. A second stairway is named the Dick Watts steps. These steps are more imposing, running from Glenholme and Regal Road down to Davenport Avenue. Both stairways were needed because of the unique geography that shaped the area.

That story begins at the end of the last Ice Age with the formation of Lake Iroquois, the ancient ancestor of Lake Ontario. Lake Iroquois’ waters were held back by huge ice sheets. The eventual melting of the ice  revealed an impressive ridge. In Regal Heights today, the ridge is known as the Davenport Escarpment. It is part of a natural feature that runs from the Scarborough Bluffs all the way to Mississauga.

A Plaque and a Name

In October 2016, the RHRA held an event to honour the life of Regal Heights community builder, Dick Watts. Some 75 people from the neighbourhood and beyond, gathered on Regal Road at the top of the stairs leading down to Davenport. They came to participate in the unveiling of a plaque and naming it the Dick Watts Steps. The event was to honour a man whose work greatly enhanced the quality of life in Regal Heights. Dick Watts died on October,  12, 2015.

Dick Watts served as Chair of the Regal Heights Residents’ Association (RHRA) for decades. He was tireless in his efforts to improve the quality of life in the neighbourhood and inspired many others to take increased pride in where they lived. Dick and his wife Florence worked side by side on many initiatives: planting communal gardens and organizing tree planting, organizing neighbourhood festivities, being alert to issues in the community requiring attention  and spearheading the publication of “St. Clair West in Pictures” by Nancy Byers and Barbara  Myrvold, now in its third edition. This excellent book presents our local history in photos and text.

There is one other unexpected delight at the top of the Dick Watts Steps. A wooden post holds a small colourful abacus. As many Regal Heights residents know, the steps are more than a short cut for pedestrians. The abacus at the the top serves as a  counter for runners to keep track of their trips up and down the steps.

Take a walk around Regal Heights and you might notice some cheerful seasonal additions to the neighbourhood. Flowers that filled the planter barrels throughout the area have given way to evergreen boughs, ribbons and decorations for the holiday season. It’s a bit of welcome colour in a sometimes grey and snowy season. Many thanks to […]