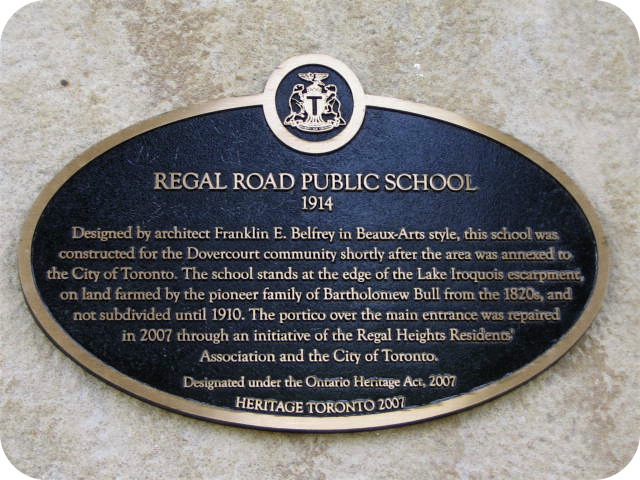 On September 24, 2007, a plaque was unveiled at Regal Road School
recognizing the restoration of the portico by a combined effort of the
Regal Heights Residents’ Association, Councillor Palacio’s office, the Toronto District School Board and Heritage Toronto.

Mary Bull, who lives in the area and is a descendant of the original owner of the land, spoke to the students about the farm that existed on this very place where Regal Road School was built in 1914.

The new plaque is located on the wall outside the front door.

Designed by architect Franklin E. Belfrey in Beaux-Arts style, this school was constructed for the Dovercourt community shortly after the area was annexed to the City of Toronto. The school stands at the edge of the Lake Iroquois escarpment, on land farmed by the pioneer family of Bartholomew Bull from the 1820’s, and not subdivided until 1910. The portico over the main entrance was repaired in 2007 through an initiative of the Regal Heights Residents’ Association and the City of Toronto.