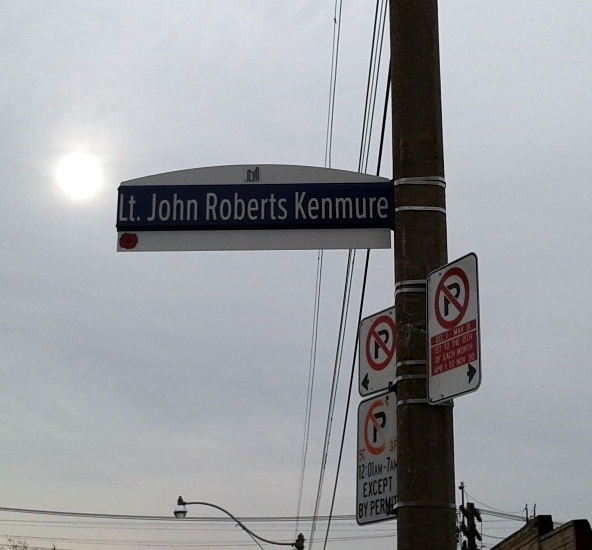 On Wednesday November 15, 2017 there was a naming ceremony for Lt John Roberts Kenmure Lane in the south east part of Regal Heights.

The following is a note from Councillor Palacio:

Hope this e-mail finds you well.

Earlier this year, my office worked in partnership with Ms. Debbie Vrbicek to name the public laneway adjacent to 14 Alberta Avenue after her uncle, “Lieutenant John Roberts Kenmure”. This resolution was adopted at the Etobicoke York Community Council meeting on April 4, 2017.

I have taken the liberty of providing some background information about Lt. Kenmure:

The Cameron Highlanders of Ottawa (M.G.) was an organization of machine gun units. The unit landed in Normandy on June 6, 1944, as the machine gun battalion of the 3rd Canadian Infantry Division, and served in that capacity throughout the North-West Europe campaign.
On behalf of the family, I am writing to invite you all to the unveiling ceremony on Wednesday, November 15, 2017, at 10:00 a.m. by the public laneway adjacent to 14 Alberta Avenue. Representatives from the family and Legion will be in attendance.

I hope you can join us for a wonderful celebration as we pay tribute to Lt. Kenmure.

Additional Photos of the Cememony

No Slide Found In Slider.

Thanks to Debbie Vrbicek for the photos of Lt. John Roberts Kenmure

Next Pub Night is scheduled for August 27th 2020. We hope it will be live at the Fox and Fiddle but if shelter-at-home conditions persist, we will hold another Virtual Pub Night by Zoom. Stay tuned for further details. -- Click the photo for more information